The lecture corresponds with the Samek Art Museum’s latest exhibition Guerrilla Girls: Art of Behaving Badly on view from October 15 to December 8. In the spring of 1985, seven women protested the Museum of Modern Art’s exhibition “An International Survey of Recent Painting and Sculpture.” The exhibition claimed to be a survey of that era’s most significant painters and sculptors from 17 countries. However, out of their 165 artists, only 13 were women, and their inclusion of people of color was even smaller. Out of that protest, the Guerrilla Girls were born.

Over the decades, the group has expanded its agenda to include sexism and racism in films, popular culture, and politics. The Guerrilla Girls believe in an intersectional feminism that fights discrimination and supports human rights for all people and all genders. They have done over 100 street projects, posters, and stickers all over the world. 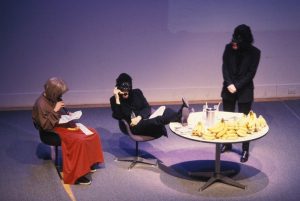 While many members are famous in the art world themselves, the Guerrilla Girls have also catapulted into mainstream celebrities. They have been featured on The Late Show with Stephen Colbert, been written about in Variety, Los Angeles Magazine, Vanity Fair, USA Today, The New York Times, and many more. The Guerrilla Girls have also had their exhibitions in some of the world’s most excellent museums, including but not limited to the Whitney Museum of American Art and the National Gallery of Art in Washington DC. They were even able to return to their birthplace and have had several exhibitions at the Museum of Modern Art. Most importantly, they are credited, with sparkling dialogue, and bringing national and international attention to issues of sexism and racism within the arts.

To remain anonymous, members wear gorilla masks and use pseudonyms that refer to deceased female artists. Over 55 people have been members over the years, some for weeks and others for decades. They conceal their identities because the issues matter more than individual characters. The exact origin of using gorilla masks to hide their identity might never be known. However, one anecdote is that one member just misspelled the term guerrilla, and since they were brainstorming disguises, they embraced the pun. As the Guerrilla Girls are quoted to have said in a New York Times interview, “Anonymous free speech is protected by the Constitution. You’d be surprised what comes out of your mouth when you wear a mask.”

The Guerrilla Girls will be speaking about the evolution of their posters, billboards, actions, and books. They are going to share trade secrets about their use of facts and humor to expose discrimination and corruption in art, film, politics, and pop culture. The talk will take place at 6 pm in the Forum, 2nd Floor, Elaine Langone Center, and is free and open to the public. Following the talk, there will be a reception in the Samek Art Museum.