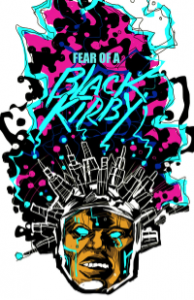 In the 1960’s, Jack Kirby and Stan Lee co-created characters like Spider-man, Fantastic Four, and Captain America in what remain some of the longest-running continually evolving stories ever told. Kirby’s bold graphic style influenced generations of artists including John Jennings and Stacey Robinson who revive Kirby’s visual mythology as the art duo, “Black Kirby.” Black Kirby remixes comic culture in the context of Afrofuturism and recasts the hero in a post-colonialist mold.

Purchased by the Museum from John Jennings and Stacey Robinson for the Spring 2014 exhibition “Afrotechtopia” in the Samek Gallery.