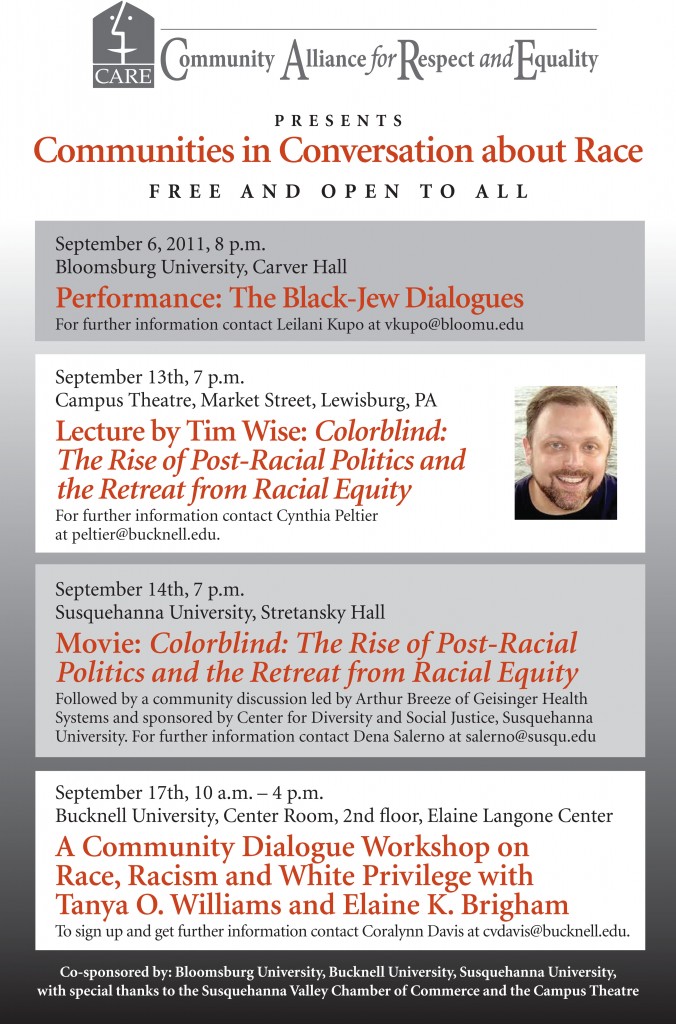 The Public is Invited to an Address by Tim Wise
on Responses to Racism in America:
Color Blindness versus Color Consciousness and to related events at Bloomsburg University and Susquehanna University

Racism has been a contested issue in American society since its earliest years. The Civil Rights struggles of the last century resulted in a significant advance on that issue. However, forms of deep racial inequality persist. If we remain committed to the highest principles of American culture, we must take a fresh look at that issue—where and how it presents itself and what’s to be done about it. That’s the subject of an address to be delivered by Tim Wise.

Tim Wise will distinguish three types of response to American racism.  Some have urged color-conscious public policies—such as affirmative action—as necessary to overcome racial inequalities. Others, more recently, have argued that racial inequalities are not a direct result of racist attitudes but a consequence of economic forces causing widespread poverty throughout the nation. The abolition of poverty is therefore the most effective way to abolish racism.

Over against these responses, Tim Wise proposes a third:  “illuminated individualism,” a deeper kind of color consciousness that embraces our many differences from each other and a full acceptance of the uniqueness of each.

Tim Wise is a prominent speaker and writer on anti-racism throughout the United States. Over the past  several years  he has addressed thousands of people throughout 48 states and on over 400 university campuses. He has trained teachers and leaders in many occupations, public and private, on methods of dismantling racism in their institutions.

Wise has authored many books, including White Like Me: Reflections on Race from a Privileged Son and Affirmative Action: Racial Preference in Black and White. In 2001, he received the British Diversity Award for the best feature column on race and diversity. In 2002, he was given the National Youth Advocacy Coalition’s Social Justice Award for his contributions to the struggle for equity.