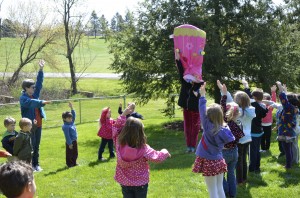 Last Thursday, the Gallery Engagement Team (G.E.T) was able to create signs, posters, and stickers with Nationwide Museum Mascot Project for the Lewisburg Arts Festival. This collaborative, the NWMMP is founded by a cute couple from the San Diego area who thought of the idea of creating individual mascots for museums around the country. Bucknell University was the NWMMP’s first opportunity to design and promote a mascot for a University’s gallery.

During the two hour event, GET bounced back ideas of how the Downtown Art Gallery should be advertised. The word DAG was thrown around and sooner than later, GET and the NWMMP had settled on quirky sayings for the stickers and posters like DAG Addicts or DAG queen. The promotion materials were fun and colorful, and yes there was an overload on puns. The couple, Brian and Christen, was laid back and fun to interact with. It was neat to work with such creative people and I must admit, it was probably my favorite GET meeting of the year.

My favorite part however was design and creating the mascot itself. The mascot’s main structure was simply a helmet and two poles attached on top. When placed on the head, the helmet structure created a frame that was 8 feet from the ground. Next they displayed their other materials- a pink floral sleeping bag, a yellow pool floatie device, red velvet pants, and lots of guerilla tape. The mascot ended up being something completely different to anything I have seen before. It expressed creativity and playfulness with a mix of intimidation. The sleeping bag was placed upside down over the helmet structure creating the effect of a headless person. The face was the sleeping bag; we constructed eyes, a nose, and a mouth which veiled over half of the person’s body. Teeth made out of a plastic glove were added last minute giving the mascot a toothy grin. The design and construction of this fun mascot took about two hours.

The next day, Friday April 26th, I had the opportunity to visit Sunflower Childcare with NWMMP and the gallery staff. The mascot was brought to life and played with the pre-school aged children for an hour. After some movement exercises, the children were brought back in to name the mascot. Yes, the four year olds were given the power to name this creative being. In the end, the mascot was named Cute Little Rosebud. And it was a name that stuck the entire weekend.

Lastly, Saturday the day of the Lewisburg Arts Festival, provided the true test. Would Cute Little Rosebud promote the Downtown Art Gallery effectively? Would GET’s stickers, signs, and hard work towards promoting DAG pan out for the best? I can honestly say yes. Cute Little Rosebud attracted many families and newcomers to the Downtown Art Gallery. I have never seen so many new faces enter inside to check out the art and learn more about GET, the Bucknell Art Galleries, or even the NWMMP. It was truly a great experience that I think everyone benefited from this promotion.