It is Day 6 and time for Contemporary Prints!

Don’t tell the other artworks, but these are two of our Registrar & Exhibition Manager’s favorites! 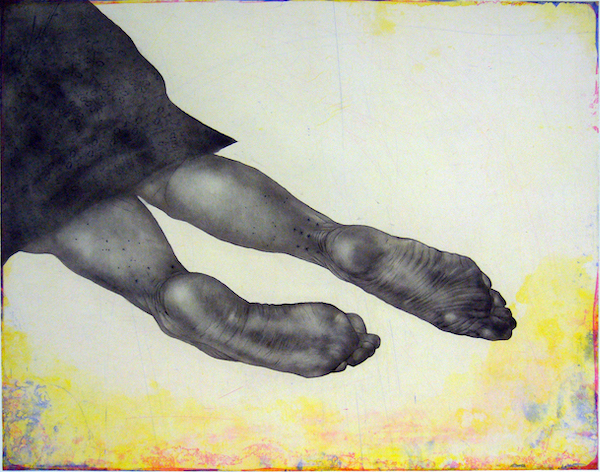 Kiki Smith is a German-born American artist known for her work in sculpture and printmaking. Her work frequently explores themes of mortality and the physical body, prompted in part by the death of her father and sister. This print was published and printed by Crown Point Press, who worked with Smith on two prints simultaneously. The other print, titled Home, can be seen as a companion to this image, and shows the feet of a presumably male figure, wearing boots and jeans, atop what appears to be flattened cardboard boxes. Smith used photographs of her own lower legs and feet as models for Still. In both, the bright colors appears only in the background; the legs and feet are printed only in black, yet have a near-photographic level of detail. The resulting image is mysterious, even haunting. 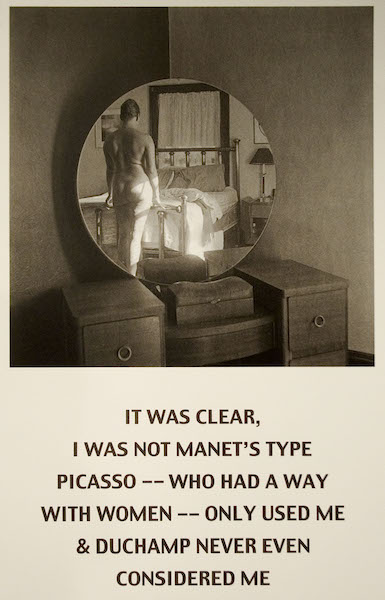 Carrie Mae Weems is an American artist whose interdisciplinary work often explores themes of gender and race. This print, Not Manet’s Type, is the second in a five-print series that each contain a nude self-portrait paired with text. The text references several 20th century artists, each male, with various reputations for their relationships with women. Weems calls upon the viewer–who may or may not know these artists or their reputations–to discern what they might have to do with her story, body, or art. The text reads: “It was clear, I was not Manet’s type. Picasso — who had a way with women — only used me & Duchamp never even considered me.”

And the Winner is Not Manet’s Type!