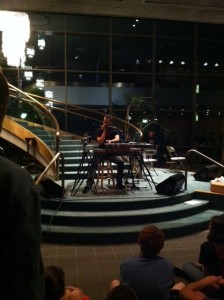 This last weekend during Bucknell’s Arts. Everywhere. Festival I was privileged to spend a lot of time with Tristan Shone, a.k.a. Author & Punisher, throughout the day before he performed on Saturday night.  I actually met Tristan the night before at around 3 a.m., the time he rolled in from his show earlier that night in Philly, only to wish him a good night and head home for a short night’s sleep to prepare for a busy day.

The next morning, as hurricane Irene dumped feet of rain on us, I was able to hang out with Tristan to learn that he got an undergraduate degree in mechanical engineering only to later pursue an MFA in visual arts from the University of California San Diego. It is from this multidisciplinary background that he has come to develop his unique and signature instrumentation. Instead of playing doom and drone metal music through the conventional guitar, bass, and drum set-up Tristan creates his own drone/dub machines that he designs and fabricates himself. These machines take a variety of forms from a Rack and Pinion and an array of Big Knobs, whose position and movement generate various effects, to his Rail, an ingenious, futuristic piston-like machine that produces a variety of effects through combinations of buttons and forward thrusts (kind of a industrial metal accordion), and finally his Headgear, that features a number of sensitive microphones that are programmed to variously alter his voice. While these machines are designed in a purely functional manner, so as to produce the sounds and noises that he desires, it is difficult not to be impressed by their sculptural qualities.

Given this sculptural vein to his art and his work Rick, the Samek’s new Director, and I accompanied Tristan to Bucknell’s Art Barn facility for a studio visit with Aaron Meyers, the Graduate Assistant in Sculpture. It was great to gather around Aaron’s work and talk about his art and the art Tristan was producing at this stage in his career. Additionally Tristan offered sage advice to Aaron and I for our current graduate school application process. It was really motivating to hear Tristan talk about the wonders of grad school and how he has been able to focus on his art and produce amazing machines and music while still working a engineering day job.

After the studio visits I separated ways with Tristan and Rick to catch a much needed nap before the big performance. Throughout the day as I learned more about Tristan and his work I became more and more excited to see his performance to see how his demeanor, which is very kind and almost soft spoken, translates into what he calls Doom Drone Metal. Having only briefly sampled Author & Punisher’s sound from his website, I wasn’t too sure how those machines could produce those sounds or what to expect from the performance. Upon entering the glassed-in atrium space of the Weis Center I knew I was in for a treat when I saw five four-foot tall sub-woofers lined in a row next to the spot where Tristan would perform. What followed was truly a visual, audial, and physical experience. It was visually captivating to see Tristan surrounded by his machines and operate them with his hands, feet, and mouth. The music, a combination of industrial machine-like sounds and heavy guitar, bass, and percussion instruments, filled the atrium with such intensity that I’m sure the glass panels and the chandelier were vibrating. In the same way, the sub-woofers pounded so strongly that the music was not only heard but felt, in your gut and in your ears.

I was blown away by Author & Punisher’s performance, not just by the music, and the sub-woofers but by his approach to musical performance as a very physical and active event. The next day for my class, Extreme Creativity, I had to produce a creative response to one of the events from this weekend’s art festival. Given that Author & Punisher was so new and intriguing I decided to try and capture the feelings or sensations that his performance generated. So using collaged digital images I attempted to produce an image that generated a similar feeling of physical and visual rhythmic and percussive intensity. Here’s what I ended up with: