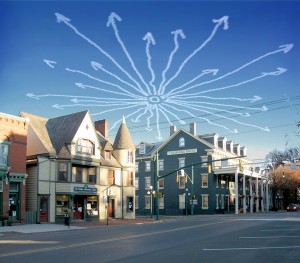 In the 1960’s, artist Robert Smithson articulated the strategy of representation summarized by “site vs. non-site” whereby certain artworks were simultaneously abstract and representational and could be site-specific without being sited. A pile of rocks in a gallery is an “abstract” way to represent their site of origin. In the 1990’s net.art re-de-materialized the art object and found new ways to suspend the artwork online between website and non-site. In the 21st century, new technologies suggest a reconsideration of the relationship between the virtual and the real. “Hardlinks” such as QR codes attempt to bind a virtual link to our physical environment.

Throughout the 1970’s, institutional critique brought political awareness and social intervention to the site of the museum. In the 1980’s and 90’s, street artist such as Banksy went in the opposite direction, critiquing the museum by siting their art beyond its walls.

Sited art and intervention art meet in the art of the trespass. What is our current relationship to the sites we live in? What representational strategies are contemporary artists using to engage sites? How are sites politically activated? And how are new media framing our consideration of these questions? The contemporary art collective ManifestAR offers one answer,

“Whereas the public square was once the quintessential place to air grievances, display solidarity, express difference, celebrate similarity, remember, mourn, and reinforce shared values of right and wrong, it is no longer the only anchor for interactions in the public realm. That geography has been relocated to a novel terrain, one that encourages exploration of mobile location based monuments, and virtual memorials. Moreover, public space is now truly open, as artworks can be placed anywhere in the world, without prior permission from government or private authorities – with profound implications for art in the public sphere and the discourse that surrounds it.”

ManifestAR develops projects using Augmented Reality (AR), a new technology that – like photography before it – allows artists to consider questions like those above in new ways. Unlike Virtual Reality, Augmented Reality is the art of overlaying virtual content on top of physical reality. Using AR apps on smart phones, iPads, and other devices, viewers look at the real world around them through their phone’s camera lens, while the app inserts additional images or 3D objects into the scene. For instance, in the work Signs over Semiconductors by Will Pappenheimer, a blue sky that is “in reality” empty contains messages in skywriting smoke when viewed through an AR-enabled Smartphone.

AR is being used to activate sites ranging from Occupy Wall Street to the art exhibition ManifestAR @ ZERO1 Biennial 2012 – presented by the Samek Art Gallery simultaneously at Bucknell University in Lewisburg, PA and at Silicon Valley in San Jose, CA. From these contemporary non-sites, artists ask you to reconsider the implications of the simple question wayn (where are you now?) 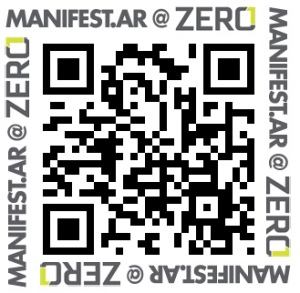