Here is a short story that Bucknell student Leland Calistri ’25 wrote in response to his visit to the Samek Art Museum with Michael Drexler’s first-year Fiction! class. Thank you for sharing your story, Leland. 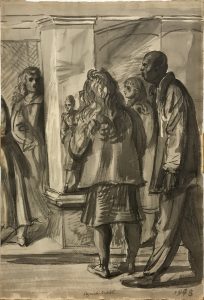 Something terrible happened on Main….

The street wasn’t on the awful side of town. But it did share one alleyway with it. I happened to walk that alleyway often. The groove of my feet would probably be preserved if everything around it was razed by atomic fire. Oh well, not my point. There was another guy who often walked down it too. He was different. Not in some eldritch way, no, he carried with him something I couldn’t see. Every pedestrian parted the way for him. He was also as silent as the porcelain figures in the window across from the lamppost.

“His name’s Rhodes, he works at the mill on the East-side” whispered a sour voice, tainted with cigarette ash like mine.

“The Colossus?” I couldn’t believe he had a real name.

“Does he ever talk or just brood like that, eh?”

“Dunno. His name is Rhodes and he works at a steel-mill”

“Okay” I said, and journeyed back to my apartment.

By some chance I ran into this Rhodes guy. Walking down to the deli one Sunday morning I sat in my usual corner seat. It had the type of leather which wore out real quickly. I glanced up from my sandwich, and whaddya know, that looming beast was right there. He had a cigarette in his mouth and fumbled around for a lighter. So, like the gentleman I am, I flashed my silver lighter towards his direction. Rhodes looked up. Then he looked back down.

The dormant mass of humanity did not reply. I felt kinda pissed. What was his deal? Did he prefer to suffer not having a lighter, or was he shy? I don’t know. Still I watched him from my corner. The lights of the deli began to singe my eyes. They were bright, industrial, and were like the ones from the mental hospitals.

Rhodes also continued to sit, mouth agape with a cigarette. I feel as if he could see me without actually having to. Like a mystic he read my heart and eyes as I tried to make sense of my surroundings. There were people like that I guess. Those who actually felt awake at all times and did not sleep through the days. I happened to feel that lull; tamed, grey water that expanded out into the horizon from the docks. It had no end in sight, only as far as one could see. So I stood there. My mind was slowly awakening, though that grey water remained untouched in disquieting silence. Rhodes then left the deli. And I followed, because why not?

Cold air nearly blew out my damn cigarette once I left. I coveted those things like Mary did her Baby Jesus. But I had to remain cool, hidden from sight. Rhodes’ presence stretched the dark alleyway. He had some connection to this place. As for me, I was a little tobacco-burning star lighting the vastness of space. Though maybe it would be nice to be a star– they don’t get their lungs messed up. I was kinda scared of that. Oh well, I digress again. Once we came out of the alleyway I shot across the bustling street. Rhodes disappeared. Not in the gimmicky kinda way, you know like those magic shows, but in thin air. My cigarette was nearly out. So, per usual, I let out one last, pithy puff and lean against the lamppost. I was almost like a sentry. Except, there was no enemy except myself…and that incident.

Something terrible occurred on Main. Something that one cannot begin to describe with the faintest utterance. The ladies were all gathered there. Yeah, the store with the porcelain figures. The ones that criticize your every move as you walk down the street. That was the place where the incident happened. A bunch of them were gathered there. All standing around the large display glass, presenting an unattainable sense of perfection found in artificial life. Anyways I was across the street when it happened.

From the shadow of the alley he came. This baffled me. He was just behind me, I thought to myself. There he was, Rhodes, the mighty giant. Something about him was different. Even the women around the window could tell. And hell, I’m usually clueless. The older lady turned her back and pretended to not see. I continued to glare. Once again that sleep feeling began to come off like a coat, and a sense of warmth from god-knows-where came to me.

Everything felt in a funk from that point on. Time froze in an instant on the entire street. One woman, the shopkeeper of the porcelain, stood in awe with an open mouth. My mind twisted and turned and battled against itself. There were no words yanno. I would have killed to place it on a notepad, even scratch it against the pavement with my bare hands. But nothing was helping. Nothing made sense. Bedlam came over the entire world. Let’s hope they don’t notice. If they did, it would mean me losing my job and everything. Rhodes strolled on through this entire thing. It was he that time stopped for. This tall, onyx-skinned fella with a slouch and cool step. His glance was a glance. It had purpose, direction. He could see me across the street. The walls fell down all around and time itself broke for that instance, I hope the watchers aren’t looking, for the love of the god if the watchers are here then everything I’ve known will be lost and lost means far from home and I am home here in my reality of cigarettes, cheap deli meat , and squalid living. The darkness here in the holes near the head showed me what to look for. The ladies had it too. But now I could see, really see all that occurred. That’s when I noticed the horror.

Rhodes had eyes, and they could see!